We will be using a Raspberry Pi 2 and the RetroPie software.

Start by downloading the latest build of RetroPie from PetRockBlock.com. We'll save it to a ~/Downloads/RetroPie directory on our MacBook Pro.

The latest stable release is v2.6 but we’ll be installing RetroPie 3.0 Beta 2. Make sure that you download the correct build depending on whether you're using a Raspberry Pi 1 or 2.

The Raspberry Pi 2 is highly recommended for the extra CPU power which comes in handy to get emulation without lag and is a requirement for some of the more demanding consoles such as N64.

The RetroPie distributable is usually compressed so unpack the archive to a .img file after the download is complete.

If you aren't keen to use the command-line on OS X or perhaps use Windows instead there are some programs that can help with the progress.

For Windows use Win32 Disk Imager

For OS X use PiWriter

Insert the Micro SD Card into your Mac and open up your Terminal program (I use iTerm2 but OS X comes with a built-in Terminal).

We need to start off by finding the device node of the Micro SD Card. Use a built-in command-line utility called diskutil to get a list of all current disks attached to your machine.

From the open Terminal window run: 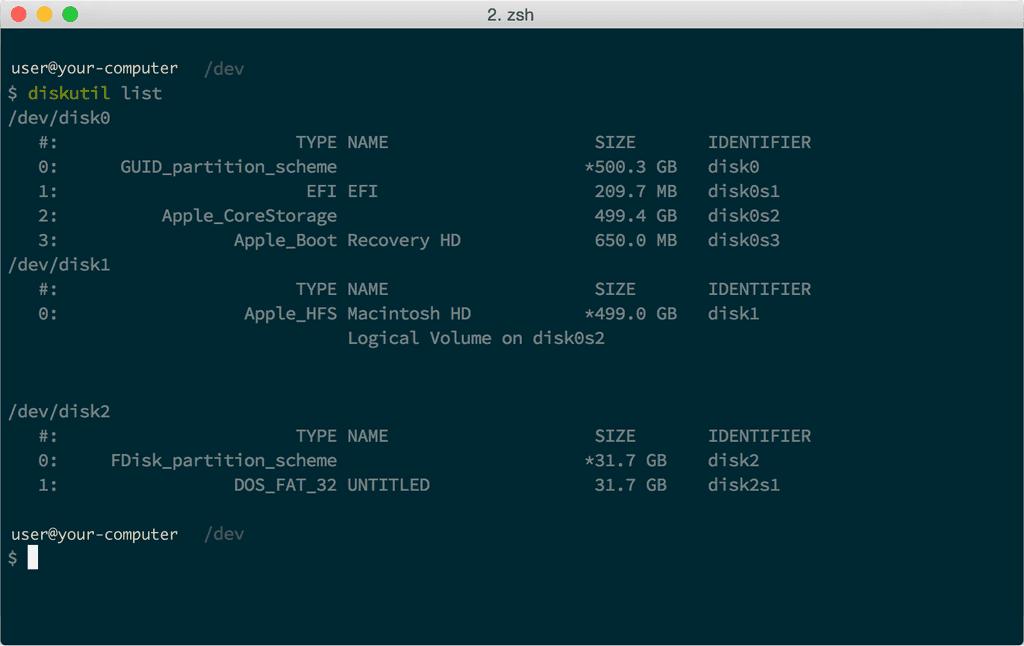 You’re looking for the entry that matches your Micro SD Card. In the screenshot we can see our SD Card is at /dev/disk2. Make note of the device node and be very sure you have the correct one.

Now that we have the device node, we need to unmount the SD Card by running:

Replace disk2 above with your own device node leaving off the /dev/ prefix.

Still in the terminal, navigate to the directory to which you previously saved the RetroPie img file.

Next we’ll use a command to load the RetroPie image onto the Micro SD Card.

Note that we use /dev/rdisk2 instead of /dev/disk2. Specifying rdisk writes directly to the disk and skips the write to buffer which speeds up the entire copying process.

It’s important you specify the correct output location or you may overwrite data on your primary hard drive and you really don't want to make that mistake!

When you hit Enter the copy process will start running but it won’t show any output to the terminal window. It can take anywhere between 5 and 20 minutes to complete so be patient.

If you’re concerned the process is taking too long, you can hit Ctrl-T to get the current latest transfer data output to screen. You can do this as often as you want until the image copy is complete. 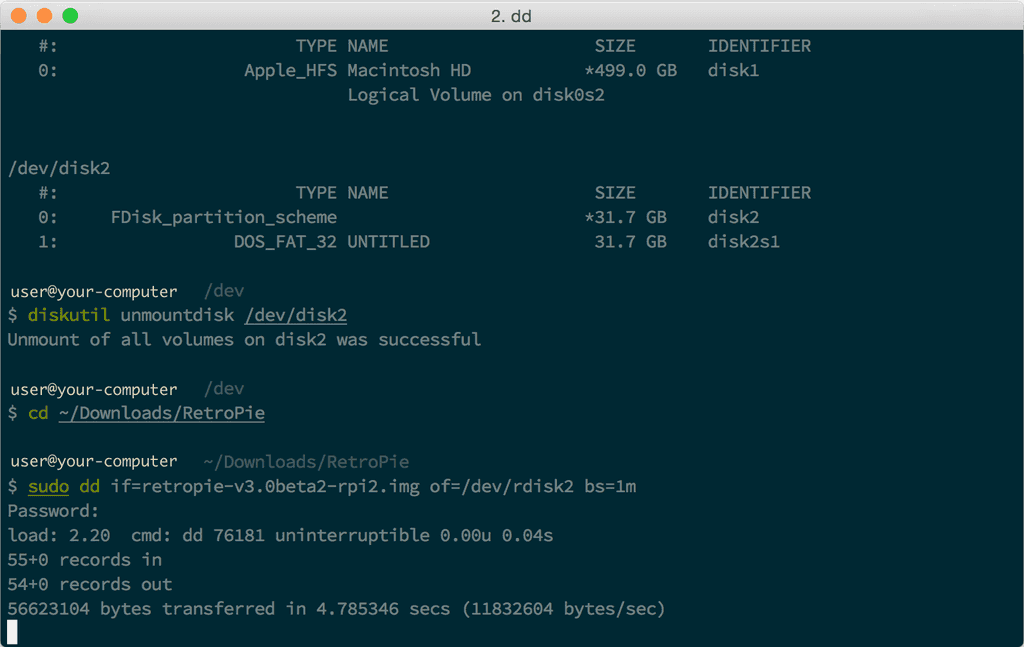 Once it’s complete verify the install by running diskutil list again. Under /dev/disk2 you should now see the installation of a boot partition as well as a Linux partition sized at approximately 3.5Gb. Don't be too alarmed at the 3.5Gb size as by default it won’t have used the entirety of the SD Card’s available space - this is something we’ll correct once we’ve booted up the Raspberry Pi. 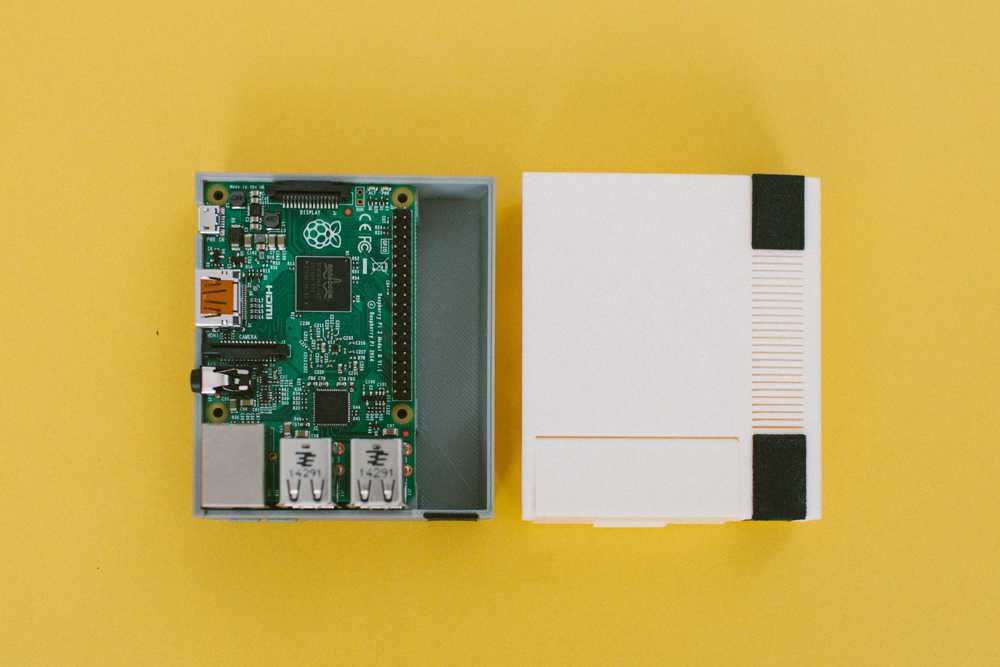 We are now ready to setup the Raspberry Pi itself.

If you haven't already, install the Raspberry Pi 2 into a case and plug in the keyboard, USB Controller, network cable and Micro SD Card. Plug it into your TV/monitor via HDMI and turn it on.

You will be greeted with a Welcome screen and it should show ==1 Gamepad Detected==. At this point, it will ask you to “Hold a button on your device to configure it”. This process sets up the controller to allow you to navigate the menus of the RetroPie UI. We'll still need to setup the controller to be recognised within the emulators themselves (but more on that later).

Once the system has booted and you're inside the GUI, select ==RetroPie== from the main menu (you may need to hit right on the controller a few times). 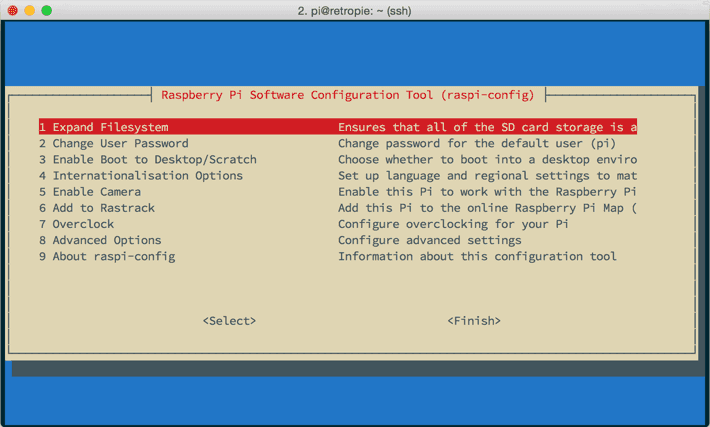 First, select ==Overclock== - you will need to use your keyboard at this config menu. You will see a message that overclocking may reduce the life of your Raspberry Pi. You may ignore this as we're just ensuring we've selected the correct high clock speed to take advantage of all the new and more powerful Raspberry Pi 2 offers.

On the 'Choose overclock preset' screen select ==Pi2== and press Enter. You will now be back at the main Raspberry Pi Config menu

Second, select ==Expand Filesystem== to kick off the process to use all of the space on your Micro SD Card. By default it will only use the first 4Gb of space. We're using a 32Gb card so we'll definitely want to expand the filesystem to take full advantage of all of that space.

Once the expansion has compelted, select ==Finish== from the bottom of the Raspberry Pi Config screen. You will be asked if you wish to Reboot - select Yes. 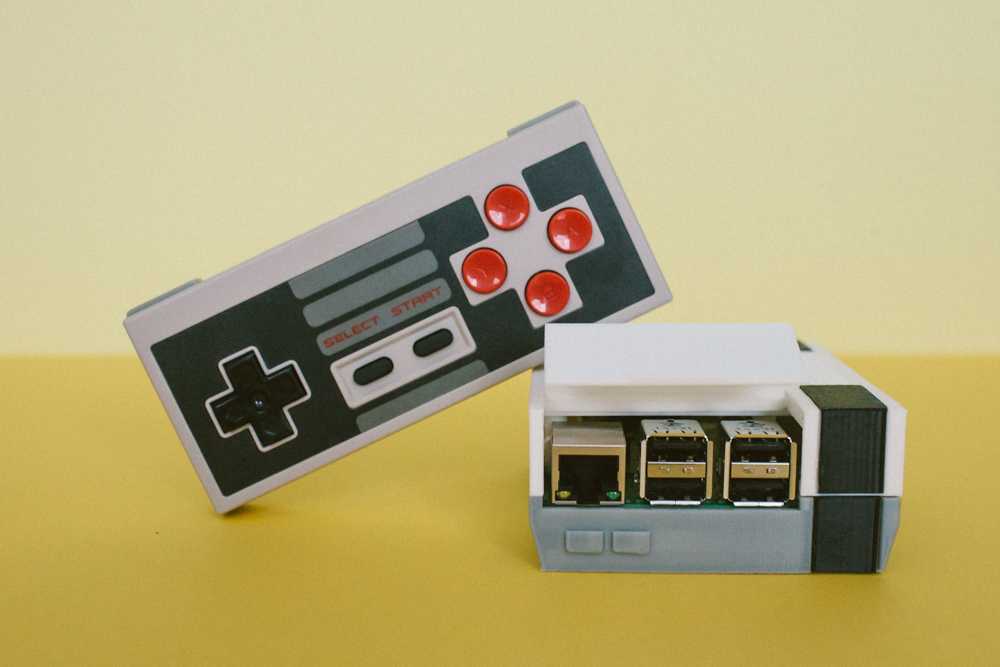 Earlier when you booted up the RetroPie for the first time it detected a controller and asked you to setup the inputs.

This setup was to enable the controller for navigating the RetroPie's UI. We will now go through the process of ensuring our controllers are properly recognised for use within the Emulators themselves.

We have a NES30 Controller which is styled like the old NES controller but has the same number of buttons as the SNES controller (including two shoulder buttons).

This will boot a setup script asking you to press the corresponding button shown on the screen. You have to be quite quick as the delay to press a button isn't very long. If you make a mistake you can just re-run the setup script.

Note: Your controller might not have all of the inputs - for example our NES30 does not have any analog sticks. You can safely ignore and wait until the script reaches completion.

Once you have completed the setup for the connected controller you will find yourelf back at the RetroPie UI.

Repeat the above process for any new controller you may want to use on the RetroPie in the future. We used a NES30 controller since our interest was in NES and SNES games but you can plug a PS4 controller into the console and use that too if you plan to play games requiring analog sticks.

Time to transfer some games across!

First off get the IP address of your RetroPie by loading up Terminal and pinging it with the following command:

Load your favourite FTP client (I use Transmit but feel free to use any others such as CyberDuck).

Connect via SFTP to the Raspberry Pi’s IP address using the username pi and password raspberry. This will connect you to the /home/RetroPie directory.

All ROMs go into the /home/RetroPie/roms directory under the relevant emulator’s directory.

In earlier versions, RetroPie sometimes has multiple emulators for the same device but the ROMs directory has been tidied up in 3.x

We'll be uploading the excellent Super Mario Bros to the /home/RetroPie/roms/nes directory to get ready to stomp some Goombas.

Once you've completed and uploaded all of your games onto the Raspberry Pi, you will need to reboot.

Reboot the RetroPie by pressing Start on your controller and selecting Quit -> Restart System. When the RetroPie starts back up you should find an entry in the menu for all of the consoles for which you have uploaded ROMs.

We have found the following to be the best settings when running NES games to reduce input lag as much as possible.

Now open a Terminal window and ssh into your RetroPie by running:

Once connected you will need to edit the NES retroarch.cfg file located at /opt/retropie/configs/nes/retroarch.cfg

Replace the contents of that file with the following configuration:

If you're keen to experiment you can find the full list of configration options in /opt/retropie/configs/all/retroarch.cfg

Lastly (and you'll need the USB keyboard plugged in for this bit), switch back to your RetroPie itself and start up your favourite NES title (Super Mario, right?). Press x before the game boots to get to the emulator config menu. Inside here we found the best settings for NES emulation was to use ==lr-fceumm== as the emulator using a video mode of ==CEA-1== (640x480 without any enhancements).

The good news is that all of the above will only need to be done once and will be active permanently.

Do you have better configuration options to get the emulation as close to the real NES as possible? Please leave recommendations in the comments below. 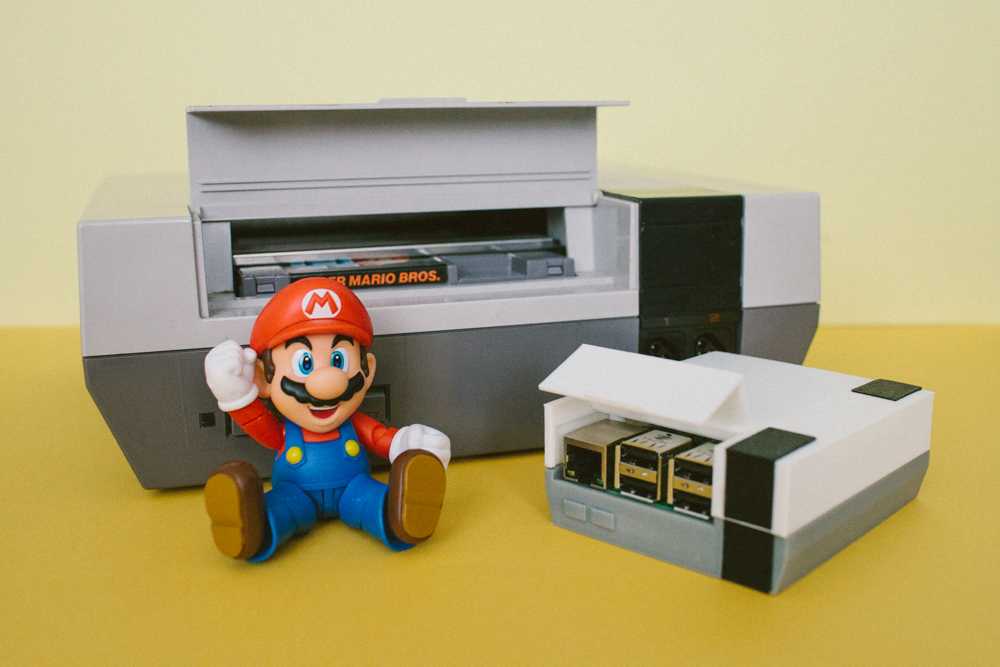 You should now have a fully working mini console to play all the games you loved as a kid. We've only loaded up games we already own the cartridges to with Super Mario Bros and Zelda taking the top Must Play Again spot.

Unplug that clunky USB keyboard as only the controller is required from this point onwards.

Buy me a coffee